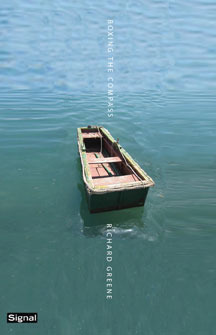 First appeared in The Globe and Mail

Ducks because of how, with Beckett, unbothered, “They paddle crazily among remnants Of winter, the mud and the rotted leaves, Casually insisting on what comes next”

It’s the same casual, unbothered insistence found in Samuel Beckett’s The Unnameable, where “the essential is to go on squirming forever at the end of the line, as long as there are waters and banks…” Richard Greene in this collection, I think, tells us that, when emulating the duck, we are most likely to encounter tadpoles in our lives, sudden, as he describes them “uncatalogued species” of pleasure.

Without tadpoles, life, at least the one cynically depicted here, would surely be unbearable. Grim isn’t the half of it. In ‘On Sherbourne Street’ for example, “Security men wear Kevlar vests/ and follow a German Shepherd on a chain/ through the hallways of my building.” Life is an “immense acreage of solitude,” a purposeless drifting apart; a journey that ends in a place “where Demerol and Morphine separate the last of our consciousness from a body shrinking away to pain.”

It’s unlikely you’ll find any of these poems in a Hallmark greeting card.

Characterized by powerful, arresting openings, sharp aphoristic jabs (“The nurses are professionally kind”; “The poor are with you always when you walk”) sonnet-like solutions, pithy ironies (“Teaching solitudes to the newly alone”; “Explaining writer’s exile to refugees”); and Thomas Hardy’s ability to convey poignant, pointed feeling using just a faint brush stroke (“on the arm of a last boyfriend before she lost all hope of marriage”), the poetry found in the first three parts of Boxing the Compass warrants and is worthy of the honour it has received.

Part Four, ‘Over the Border’, is, however, another matter. G-G Judges Kim Goldberg, Kimmy Beach and Norm Sibum call it a “long, remarkable narrative poem … a poem of chance meetings on American buses and trains. Richard Greene’s writing is restrained in the best sense, striking no indulgent or false notes. One has the impression of a nation in deep trouble as witnessed by a traveller of sympathy and concern.”

There is, I think, too much of Aristotle’s historian in ‘Over the Border’; a singular description of what has been, burdened by too much truth; not as much pleasure as can be found in the book’s previous parts. Though it fails, for me, to produce as much emotion, as much imaginative action, as great poetry should, I will, nonetheless, hear it’s final three lines (quoted above), years from now.